Monsters Under the Bed

This weeks blog has went into hiding. It is somewhere on the computer, where? Good question because I no idea where it is living and I can’t want to keep looking. So no favorite people of 2015 for you. When I find it we shall post it in the New Year, of course if you never see it well…. 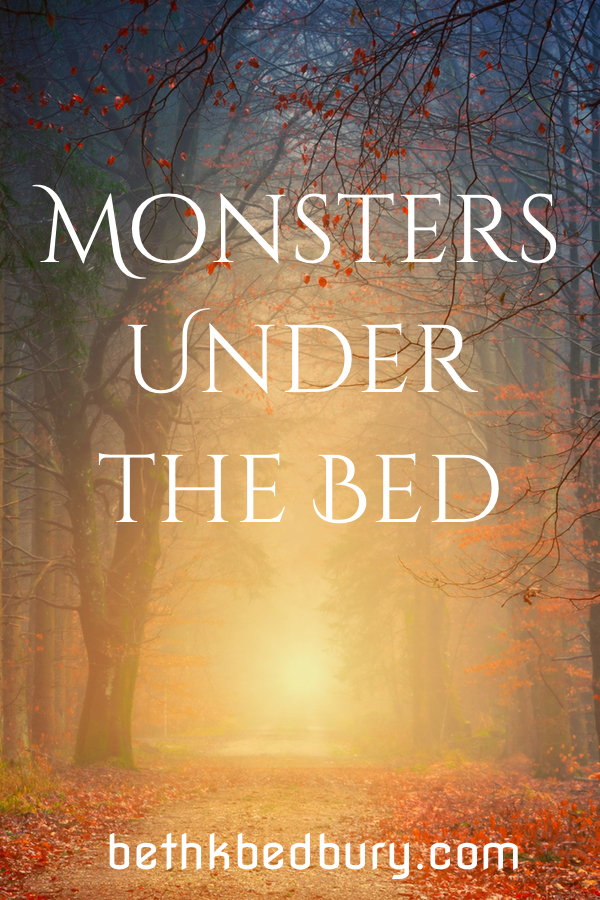 Since I have no topic or idea in mind this blog is going to be about me when I was about 7 or 8. I was heading into third grade and we had just moved out into Emerald Hills which was rural. Mom had to drive me to get to the bus stop to catch the bus to get to school. There were these huge pine trees in our yard. They were old and they were huge.

They probably seemed even bigger due to being a child but I remember being very wary of them. There was something to them them that made me keep an eye on them until we got used to each other. I had a great respect for those trees. It is also the first time I remember feeling trees.

This house was also the first and only house that I had monsters under my bed. I jumped onto my bed so the monsters under the bed couldn’t grab my ankles. What lived under my bed was scary and was going to try and get me. This year stands out (we only lived there about a year) because I have never had this issue before or since, so it is clear in my memory. Pretty sure I didn’t mention this to the parents.

Looking back the area was newly developed and not many people were living out there. But there was enough building and digging going on to agitate the energetic beings, local animi, and whatever else lived in the area. They realizing that I could see and hear them, and moved in under my bed. Most likely they were benign but being a kid I had no clue what to make of them or how to deal with them. Except to make them stay.

When we moved I took action. I stood in front of my bed and had a conversation with the monsters. This conversation set the boundaries for them, they were not allowed to move with me. They had to stay behind, no monsters could move to Helena with us. They did not move with me. A friend later on pointed out I had performed a spell, I bound them so they could not follow me.

All too often in spirituality and magick we don’t trust our intuition that tells us to do something. As a kid I had no doubt. I knew that what I was doing would work. I knew it would, it simply had to. It is this combo of intuition and assuredness that magick really stems from. It is not in elaborate workings or rigorous preparation. It is in ourselves and the knowledge we hold in our cells.