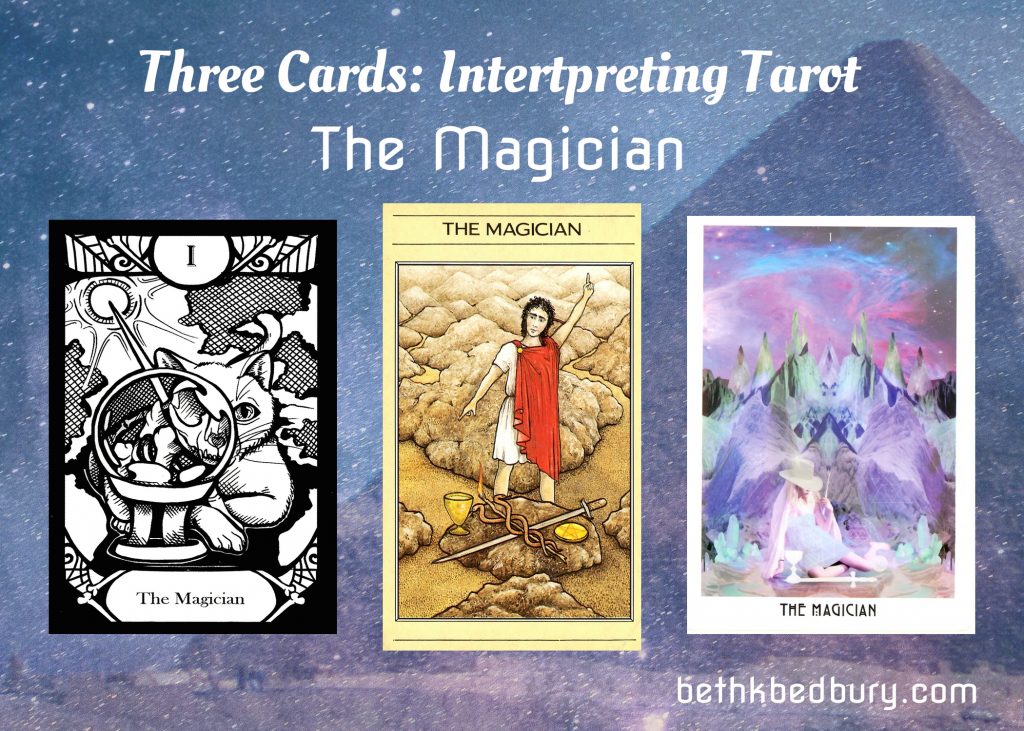 The Magician – From the Animalis Os Fortuna

This version embodies the confidence that comes with the Magician with this picture of a cat. When you look at that cat you want what it has all that self assuredness that you are magick and that there is no doubt of what you do coming true. The Cat holds a wand and gazes through a crystal ball with one eye. You get the feeling that his Magician is seeing more than what’s on the surface, it is seeing into the deepest parts of your soul. The wand is sparking or pointing to the moon or is it the sun? There’s a certain ambiguity when you bring in your imagination. 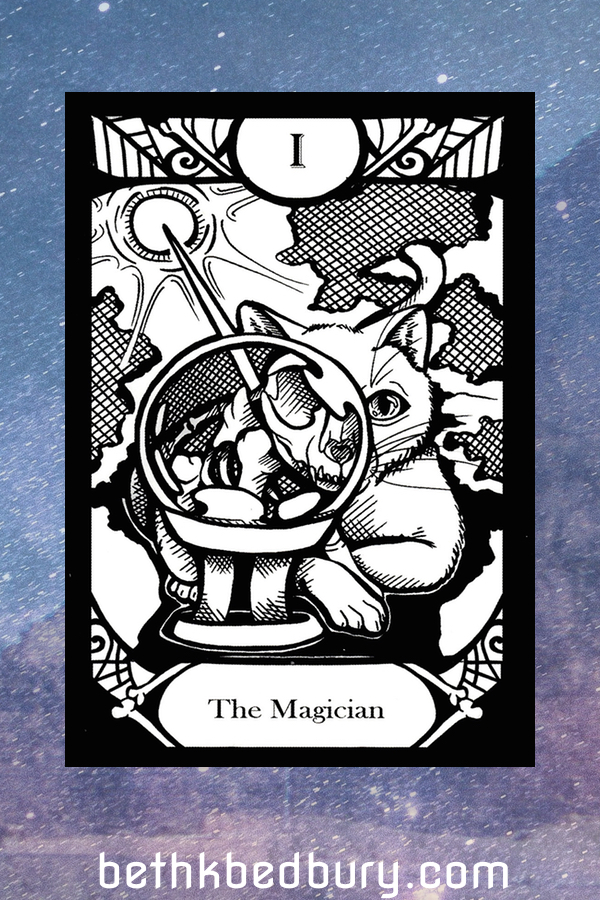 This Magician holds certainty of worth in her, there’s no doubt that the skill have been mastered and are at her disposal when needed. The feel here is knowing yo have this and that you are a force to reckon with. That you know when to use force and when to pull back. What’s learned has been assimilated into you and now you put it to work.

Journal Prompts
What was the thing that stands out most for you with this card? How does that make you feel? What skills do you need to be sure of?

The Magician – From the Mythic Tarot (80’s version)

This is very much a traditional Rider Waite version of the Magician. This particular deck features Hermes as the Magician. Hermes is the god of cross roads and communications. The Magician is also a messenger. He stands in front of a rock that he is using as an altar where the symbols of the four elements lay before him. The Magican points the sky with one hand and the earth with the other. This card brings in “as above so below’ which represents the microcosm and the macrocosm of the Universe. Once again we see confidence but the feel is of confidence but of the use of all the tools he has at his disposal. Hermes knows he can calls down heaven and earth whenever he needs it. 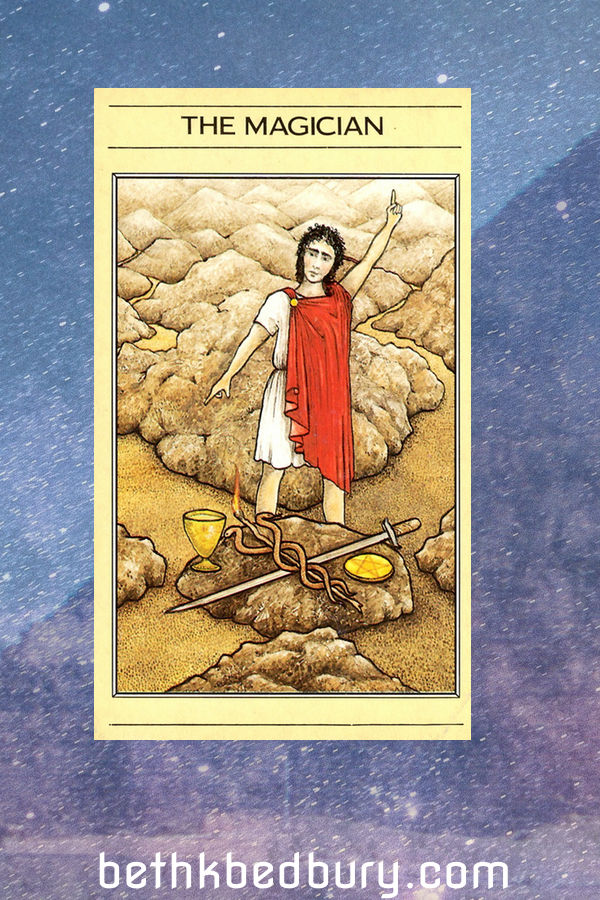 He’s got this and is ready to put his skills to use to get where and what he wants. He has all his tools ready to be used as he needs them. What you do with the skills the Magician brings you is up to you. He reminds us that we can do anything but to use our tools to check in and keep us on track.

Keywords: tools and using them, arts in the sense of skills, deep knowledge of the Universe.

Journal Prompts
How do you see the Universe? What do you so with the tools and arts (skills) that you have? Where can you combine the Universe and your arts?

The Magician – From the Starchild Akashic Tarot

This deck features a woman sitting on the ground holding a wand and her other tools in front of her. She feels integrated with the all around her. She’s not separate form her environment she is part of it and know it. She use this knowledge to bring about her magick. She doesn’t simply use her tools they are part of her. They sing for her and make her soul sing as she uses them to bring her even more into the Cosmic. She is calm, mysterious, and confident but we will never quite know all that she is thinking or can do. The Magician is not willing to give you all her knowledge today that knowledge is earned and learned and until you figure that out she will allude you. 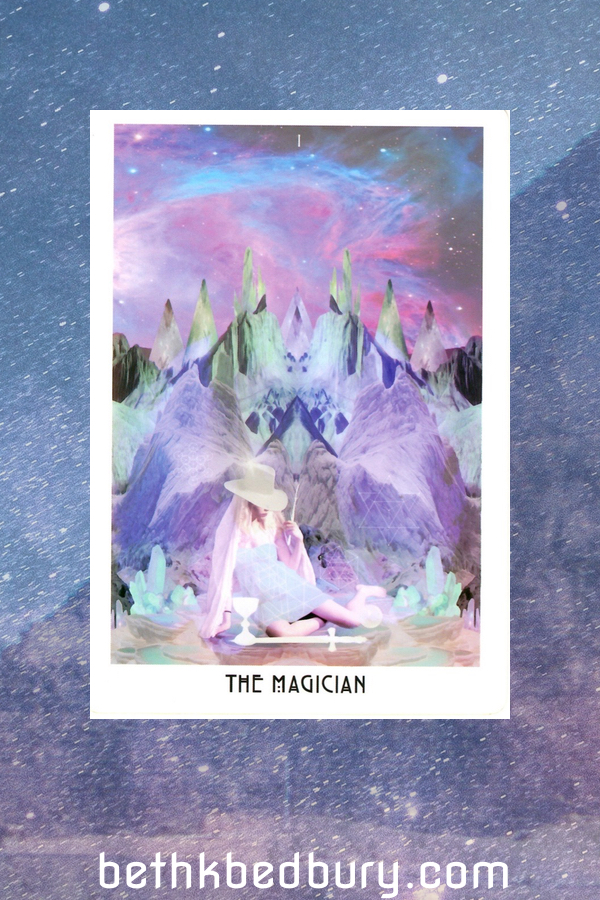 She uses her skills and tools as extensions of her. She uses her connection to the Universe to bring about her magick. The feel here is one of mystery and integration that nothing is outside of her but we will not fully understand her until we sit in her place as the Magician fully part of the Universe and integrated.

Journal Prompts:
How would it feel to be part of everything and realize that you are magick and stardust? What connections do you feel with her and where does she feel remote? Are your tools outside of you or an extension of you?

Catch me on INsta